With thanks to Debra Jeffreys-Glass for photos!

And Sustaining All Life – Climate (Sweet)-Warriors!

Read MorePhotos From the Last Day of ROAR August 27th 2022

“Environmentalists rallied… to promote the Clean Water, Clean Air, and Green Jobs Bond Act.
They say the $4 billion project would restore Long Island’s shorelines and reduce flooding.
They also say it will also provide crucial support for New York’s economy, supporting over 100,000 green jobs.”
The act will be on a statewide ballot in November.
If passed, it will be the first environmental bond in 26 years.“
VOTE YES

How to Participate in Climate Week NYC 2022

Climate Week NYC is a week of events run by The Climate Group that has taken place every year in New York City since 2009. The summit takes place alongside the UN General Assembly and brings together international leaders from business, government and civil society to showcase global climate action. This year Climate Week runs from September 19th-25th.

There are numerous events open to the public throughout the week which you can find ?on the Climate Week website. We encourage you to register for and attend these events to learn more about how major companies, businesses, and government officials plan to address the climate crisis. If you are not located in NYC, some events may be available to attend virtually.

If you are unable to attend any of the events, you can still celebrate Climate Week by making an effort to create sustainable habits in your everyday life. Checkout some suggestions below!

We hope you have a safe and happy Climate Week! Check back next week for more green tips.

NYLCV Mission: “New York State faces a wide range of sustainability challenges that differ from region to region. Jointly with NYLCV, the NYLCV Education Fund issues policy agendas that lay out specific legislative and budgetary remedies tailored to different levels of government or regions of the state. They serve as practical blueprints to help guide elected officials, policymakers, political candidates, voters and the general public toward a more sustainable future.”

Read MoreNY League of Conservation Voters: Vote YES on Prop #1 AND How to Join in NY Climate Week 2022

New York City has a Capital Budget, separate from its annual operating (or expense) budget, which presents the funding plans for city construction and repair projects, and purchases of land, buildings, or equipment.

A “capital project” involves the construction, reconstruction, acquisition, or installation of a physical public improvement with a value of $35,000 or more and a “useful life” of at least five years. This may include everything from buying garbage trucks to reconstructing bridges to building housing.

The City Charter gives Community Boards a broad range of responsibilities for advising the City about local budget needs and priorities. The Charter mandates that the Community Boards consult with agencies on the district’s capital and expense budget needs, hold public hearings, prepare capital and expense budget priority lists annually, and react to the funding choices presented in the preliminary budget. To meet the Charter mandates a dynamic formal structure was created to enable the City’s communities to make their needs known to agency decision makers, the City Council, and the Mayor. The Office of Community Board Relations within the Office of Management and Budget (OMB) oversees procedures that assure the Community Board’s active and effective participation in forming the City’s budgets. The following outlines the essential features of this process.

Overview of the Community Board Budget Process

As representatives of local communities, Community Boards are most concerned with City spending that affects the quality of life for residents and workers in their districts. The process by which the Community Boards participate in formulating the City’s budgets has six major elements.

From May through September, Community Boards have two formal opportunities to consult with agency officials about budget needs and the funding of programs and projects.

The agencies that formally consult with the Boards are the Department for the Aging, the Department of Buildings, Economic Development/Business Services, Environmental Protection, Fire, Housing Preservation and Development, Parks and Recreation, Police, Sanitation, Transportation, and the Human Resources. Budget consultations take place at two levels:

These formal meetings give both the agencies and the Boards an opportunity to openly discuss the criteria used in making spending choices.

Each September and October Community Boards hold committee meetings and a public budget hearing to help develop specific budget priorities. During the hearing the public and Board members have the opportunity to identify community district needs. At Queens Community Board 3, this hearing takes place during a Public Participation Session at the Board’s September monthly meeting. Additional opportunities for public participation in the budget process comes at meetings of its Capital & Expense Budget Committee during September and October.

By the date announced by OMB, usually late October, Boards must formally submit their budget requests to City agencies and the Office of Management and Budget as the agencies begin to prepare their next year’s budget. Budget submissions consist of three components:

For the Mayor’s Executive Budget, published on April 26th, these same budget requests are evaluated by OMB with funding recommendations published in the Register of Community Board Budget Requests for the Executive Budget.

The Community Board’s participation in the budget process is a year round activity. Even before one budget is adopted, a new process of considering budget requests for the next cycle begins.

Assessing community needs is one of the most important and useful activities performed by Community Boards in determining the district’s service and budget requests. This is an ongoing activity that involves each Board member and committee. Personal observations, published surveys, public hearings, discussions with local service chiefs, and the use of such community records as minutes from the District Service Cabinet and the district office complaint log can all help in identifying patterns or areas of problems within the community.

The Board determines if an identified problem can be addressed by reallocating existing resources or through a request for capital or expense budget funds. Throughout this process, an understanding of overall City and agency funding priorities and constraints helps the Board match its budget proposals to available funds.

The Board’s long range needs are presented to City decision makers in the Statement of Community District Needs which is published by the Department of City Planning within a framework of information detailing demographics and community facilities.

The more a Board knows, the more effectively it can participate in developing the City’s budgets. To this end, OMB publishes expense budget and service information sorted two ways: by agency and by local service district. The first gives the Citywide picture for the agency and the second shows community and borough allocations of money, personnel and equipment. Boards can find out how many people are assigned to their district, what they do, how much they are paid, the equipment assigned to the district and contract services for agencies which provide local level services. Indicators of agency performance are also published in the District Resource Statement and the Geographic Reports for the Expense Budget.

OMB also publishes capital information on a geographic basis so that Community Boards know which projects are being funded in their districts, how much they will cost, and when implementation is planned for each project phase. Geographic Reports for the Capital Budget are published with the release of each budget phase.

The Capital Commitment Plan details projects planned for the next four years. The planned timing and the cost of each phase of a project is available to the Community Boards. Combining formal budget participation mechanisms with increased availability of geographic information gives the Community Boards the opportunity to influence agency and OMB budget decisions about the allocation of city resources.

New York City’s fiscal or budget year runs from July 1 of one calendar year through June 30 of the next. The following describes the steps in the budget adoption process. The deadlines shown are mandated by the City Charter but are subject to slight annual changes by the City Council and Mayor.

By one month after Budget Adoption, Borough agency service chiefs submit plans for allocation of personnel and resources to the Borough President. Within 30 days of receiving such plans, the Borough President may propose a reallocation of staff and resources, providing the modification does not increase or decrease personnel or resources for any Community District by more than 5 percent. 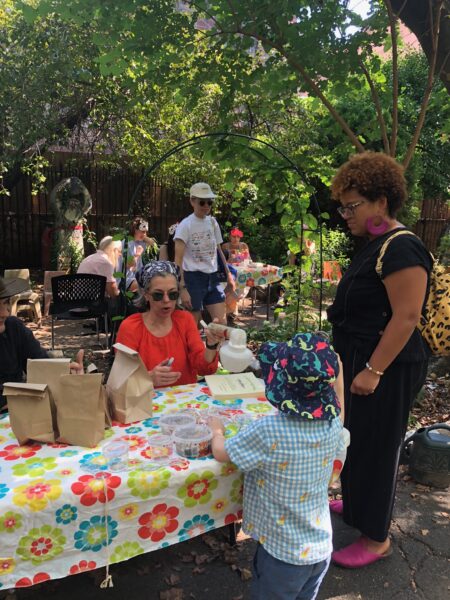 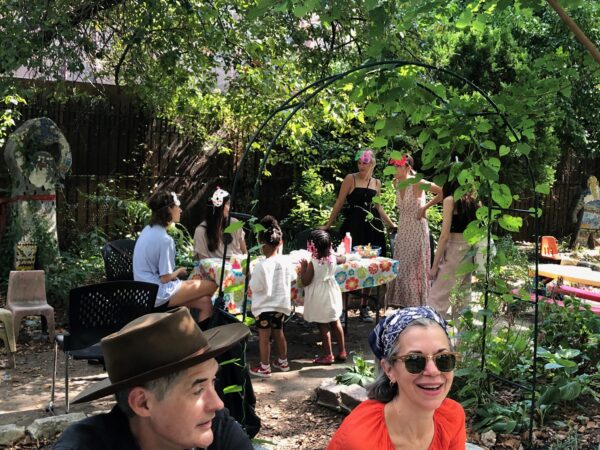 and a bit of soccer in the park… 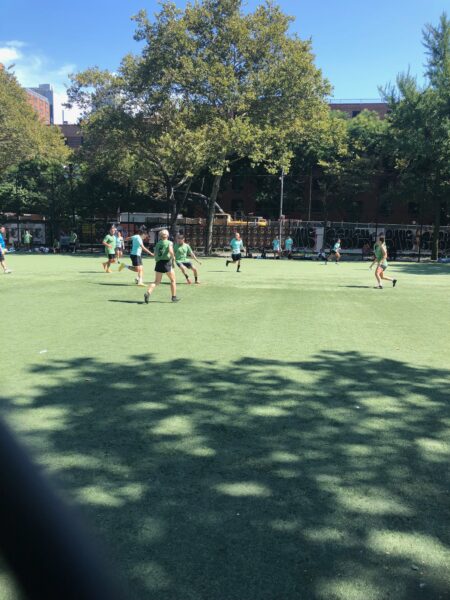 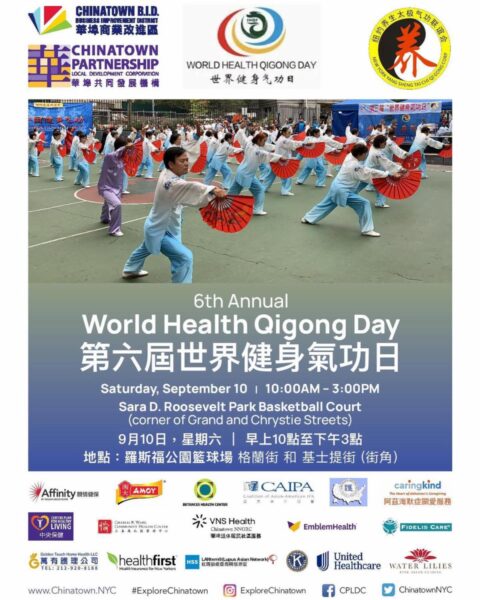 (And…”Don’t Bury the Pit” Info Below) 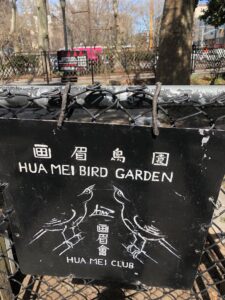 Current Use: 4 large garden plots (one, the Hua Mei Bird Sanctuary, 3 main entryways, one Parkhouse (serving all five NYC boroughs), Park’s staff parking inside the park at Broome, a synthetic turf soccer field, and ‘The Pit’.

–Pipe a water source for all gardens – Bruckner boxes and water fountain.

-For seating in plaza: fasten two round metal tables/attached seating – visible from street.

– Dept. of Sanitation install trash cans both sides of Delancey (ala ChinatownBID’s on Grand).

The Pit is a vital, flexible, shared and uniquely multi-use adaptive space. It’s the areas main anchor of positive use.

-Unclog/repair drainage- southern end of Pit. Lighting: more/brighter/downward facing. Return benches outside of the Pit on the southern end.

-A mural on all Pit side walls.

-Install low in-ground pieces apertures to attach volleyball net rig as requested by girls in schools here for years to return this sport to SRP.

Community Organizations and the Mult-Use Pit:

-Install permeable pavers Grand to Delancey. In sections to allow some areas to stay open.

-Fix benches along east/west sides of The Pit.

-Activate the Broome Parkhouse with a use that dynamically engages parkgoers here. 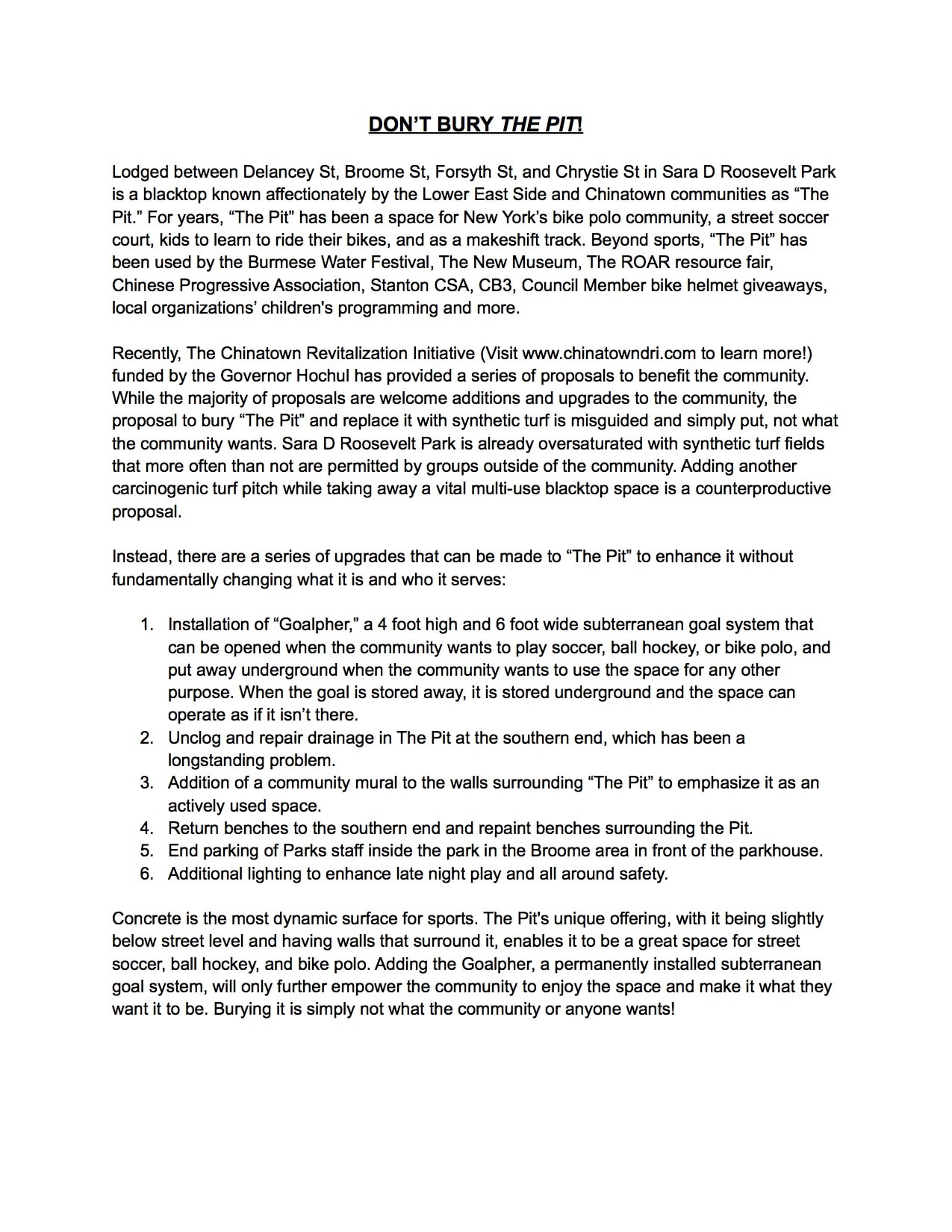 This Manhattan Park Was Once a Gem. Now It’s a ‘No Man’s Land.’

A decades-long fight to reopen a park house, once a thriving community center in a working-class neighborhood, has taken on new urgency during the pandemic.

“It gets neglected,” said Alysha Lewis, a former chairwoman of the local community board. “The parks department really treats it like it’s a stepchild.”

Sandra Dupal, who owns a bakery, offered in 2017 to pay for a kiosk to sell sandwiches and snacks so that more people could enjoy the park. She never got an answer from park officials. “The park has untapped potential,” she said.

Reynaldo Belen, 20, who recently graduated from a high school across from the park, said it should be used to bring people together. “That could kind of stop some of the violence in the area,” 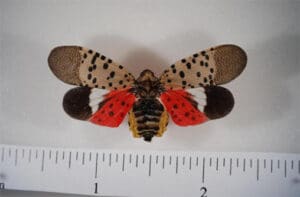 Spotted lanternfly (Lycorma delicatula–SLF) is an invasive planthopper, first discovered in New York City in July 2020. While it can infest trees, it is not considered a widespread threat to our city’s forests. However, it is a significant threat to a wide range of agricultural crops including walnut, grapes, hops, apples, blueberries, and stone fruits. The Tree of Heaven (Ailanthus altissima) is its preferred host tree and is required for its reproduction. SLF has the potential of damaging natural areas and becoming a nuisance in landscapes.

The spotted lanternfly does not typically kill trees, it infests. Although it can weaken a tree’s natural defenses (making it vulnerable to other pests and diseases), spotted lanternflies are mostly a threat to agricultural crops.

You can identify an infestation by looking for: What is NYC Parks Doing About Spotted Lanternflies?

How You Can Help