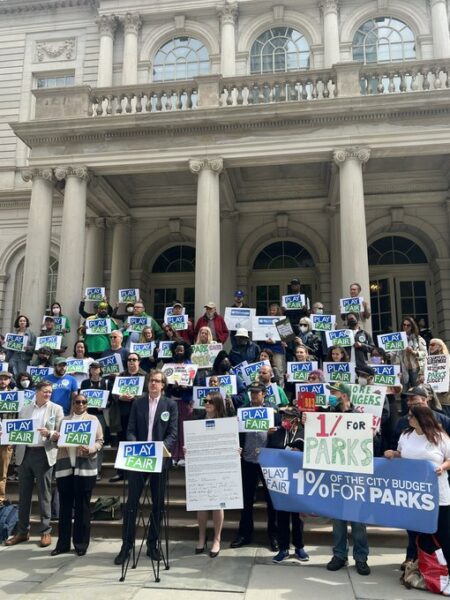 Despite his commitment to increase the budget for parks, Mayor Eric Adams cut $63 million from the Department of Parks and Recreation.

During his campaign, Mayor Eric Adams committed to allocating one percent of the New York City Fiscal Year 2023 budget to the Department of Parks and Recreation. This would have marked a significant increase from the 0.5 percent that the city’s parks have worked with since the 1970s.

However, when the mayor released his $98.7 billion preliminary budget proposal in February, community advocates were disappointed to find only $557 million dedicated to NYC Parks, which is far from the promised $1 billion and a $63 million cut compared to the last budget adopted for 2022. During a press conference held on February 4th, Adams said that while he remains committed to reaching the one percent goal in the future, the end of federal stimulus forced him to implement budget cuts in every agency – except for the New York City Police Department.

In response, the nonprofit organization New Yorkers for Parks launched a petition and organized a rally on March 22nd to push the Adams administration for more funding. An hour before the New York City Council Committee on Parks and Recreation’s budget hearing that day, 200 participants gathered on the steps of City Hall to discuss the impact of the budget on green spaces, residents, and workers. Rally attendees included Committee members Shekar Krishnan, Julie Menin, Eric Dinowitz, and Marjorie Velázquez; Borough Presidents Mark Levine and Antonio Reynoso; and City Council members Sally Nurse and Althea Stevens.

Community advocates, residents and elected officials taking a stand for NYC parks. Adam Ganser, Executive Director for New Yorkers for Parks, said it was the biggest rally to take place on the City Hall’s steps since the beginning of the pandemic. Credits: New Yorkers for Parks.

“New Yorkers relied on public parks more than ever during the COVID-19 pandemic,” said Henry Garrido, Executive Director of DC 37, the largest union in the country.  “The City cannot afford to make cuts that will reduce services and staff. It is unthinkable to ask our members who are frontline essential workers to sacrifice yet again and do more with less.”

The Department of Parks and Recreation manages over 2,000 parks and nearly 30,000 acres of land covering 14 percent of New York City. It also includes more than 5,000 individual properties, such as community gardens and Coney Island Beach. According to the Department, they also operate more than 800 athletic fields, 1,000 playgrounds, 65 public pools, and care for 1,200 monuments and 23 historic museums, among other facilities. But despite these numbers, New York City remains behind other major urban centers in the United States when it comes to amenities. In a 2020 report, the Trust for Public Land found Minneapolis had almost twice as many playgrounds per ten thousand residents as New York, and Chicago had twice as many public restrooms.

The NYC Department of Parks and Recreation has been on a bumpy road when it comes to its budget: in the fiscal year 2019, the agency received $534 million, which was followed by $526 million in 2020  until the pandemic prompted a dramatic $47 million cut for the fiscal year 2021. As a result, 1,700 people from the seasonal workforce were not hired back last summer, and severe maintenance issues were observed by residents: safety hazards, rat infestation, garbage, fallen trees, and destroyed gardens were among the numerous complaints that the Department received.

The City’s green spaces are mostly funded by public money, but they also may receive special grants from the city’s other governmental bodies for specific projects, such as the creation of Little Island Park, which opened its doors in May 2021. They may also receive funds from private donors. While this can make up for some underfunding of the Department of Parks and Recreation, it can also create inequity in park maintenance.

…According to one of the group’s reports, the average park size in poor neighborhoods is 6.4 acres, compared with 14 acres in wealthy neighborhoods…

…Roughly 99 percent of New York residents currently have access to green spaces, but, according to The Trust for Public Land, creating 70 new parks in the Bronx, Queens, South Brooklyn, and Staten Island would close this gap for good…

In addition to a budget increase and better park equity, advocates also ask that Mayor Adams continue the work started by former mayors Bill de Blasio and Michael Bloomberg by planting another million trees by 2030, adding to the million trees planted by his predecessors. With five million trees, 22 percent of New York City is covered by a tree canopy. According to many of the 25 nonprofit organizations that collaborate with the NYC Department of Parks and Recreation to protect green spaces, trees play a key role in lowering temperatures and fighting global warming…parks can also reduce the effects of flooding and protect wild birds who use trees as a resting place during their migration.

Cohen said:…“More parks mean more ground to absorb the water, and more money means more maintenance to prevent the trees from falling on people during the storms.”

From 2014 to 2019, parks department staffing has seen less growth than nearly all other departments: while Parks staffing grew by two percent, for example, Corrections grew by 17 percent, and Homeless Services by 25 percent. In 2019, the Center for an Urban Future found that the parks department only had 39 plumbers for the entire parks system and just 400 Park Enforcement Patrol Officers. Currently, New York City only has one gardener for every 133 acres of parkland, while San Francisco has one gardener for every 20 acres. New Yorkers for Parks Executive Director Adam Ganser said that despite reports of burnout, the NYC Department of Parks and Recreation didn’t recognize their employee’s work during the pandemic. During the rally held in March, Henry Garrido said that visits to public parks, green spaces, and beaches were up 70 percent from pre-pandemic levels, which is much more people to manage for social distancing.

“250 workers have already been eliminated as part of the budget cut, and now we are about to lose 3,000 more positions in June,” said Ganser. “It is easy to blame the NYC Department of Parks and Recreation, but they have been the victim of austerity measures for more than 40 years. Elected leaders are responsible for what’s happening in the parks, and we won’t stand aside.”