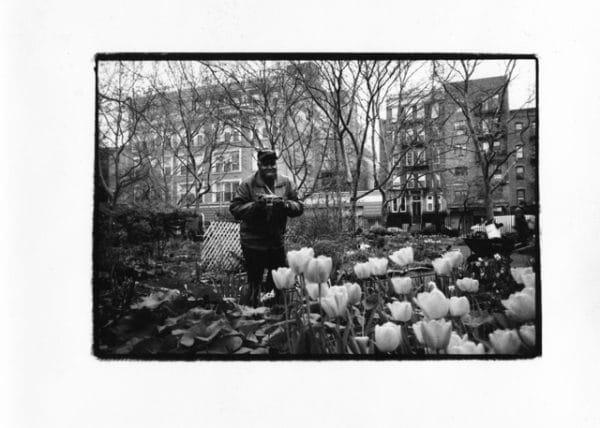 and the introduction to Bob – for more of his history (from K Webster):

Bob Humber: This is what a Hero looks like.

It will be hard to capture the love of community, the sweet smile and warm welcome, the extended hand and ready joke, the calm courage, the kindness and wisdom of Bob Humber.

Bob’s inspiration, The M’Finda Kalunga Garden, is an oasis in the very tough Sara Roosevelt Park. Though the neighborhood continues to attract a higher income bracket, he fights for the people who were here long before it felt cool or safe to others.

But he welcomes everyone: rich and poor, all colors and languages, ages and genders.

He fought to get the drugs out of Sara Roosevelt Park in the late 70’s and early 80’s. He and other neighbors joined together to change everything. He risked his life on bike patrol through pimps and drug dealers with a goal to make the park safe for children. He started and taught leagues for youth. He still teaches young people about the history of this place and a sense of their own belonging here.

His decency, his firm and loving guidance still makes all the difference to how a life turns out. He has stayed and fought for a good community. And though he lost many battles and people, I believe he has won the day.

He has also won many awards: The Scott Give Back to Grow Urban Gardener of the Year, Citizens for NYC, etc. He is known around the world. He has the respect and friendship of several Park’s Commissioners as well as the men he provides with a coat and a conversation. He has his family and his neighbor’s love and respect. He built a real life here.

He is the single most known gardener because he is always here. His only requirement for you to be here is that you pitch in. Many of us gardeners and Park advocates are here today because he asked, “could you give me a hand with this?” We were hooked.

Despite the very real and harsh scourges of racism and class oppression, Bob has managed to stay kind and generous and forgiving.

He is also deft with words when an injustice happens. When our nursing home was taken from this community for condos, he said “I looked out for the children in this park for decades and I was hoping, when I could no longer give back, I would have a room in Rivington House overlooking my life’s work”.

…There are some days I am not sure we deserve him.

Many here call him “dad” because he helped raise them. He has taken to calling many of us ‘my favorite daughter” or “my favorite son” Truthfully, and he will admit this, it’s in part because while he always remembers “you” he doesn’t always remember your name. But I think the real reason is because in that moment – you are his favorite.

When my mother lived with us, while her mind bore the disintegration that Alzheimers disease brings, he was a beacon to her. He would laugh at her grumpiness and she delighted in his humor and attention. Thank you for that Bob.

It’s how he is. There is no such thing in Bob’s universe as an unimportant person or a human being who is beyond the reach of our consideration, care and thought. That’s why children love him – he treats them with respect and with liking.

Bob, I know your brother Ron and your friend Pete are smiling tonight (and probably cracking a joke or two about “your wives”).

I hope this award gives you some small sense of the pride and gratitude we have for you and all you do, but most of all for the friendships you have offered us.

Pops, you truly are the most beautiful flower in our garden.